In the complicated process of breaking down a meal into living breathing tissue we fail to realize that there are a few helpers along the way, in fact about 100 trillion helpers. Our gut (digestive tract) is home to nearly 100 trillion bacteria. These bacteria out number our body cells nearly 10 to 1. Of these 100 trillion bacteria 85% are considered good and 15% are considered bad. It is a happy balance of these good and bad bacteria that keep us healthy. When the balance is thrown off the bad bacteria can reek havoc on our immune system and cause a great deal of problems. These problems range from chronic fatigue, joint pain, psoriasis, irritable bowel syndrome to autoimmune conditions and obesity. This irregular ratio of bacteria can result from illness, poor diet, aging and antibiotic use. Keeping the balance of bacteria through diet and if necessary probiotic supplementation is crucial to overall health and proper digestive function.

What is a Probiotic?

Probiotics are good live bacteria that help to absorb nutrients and fight disease and infection. 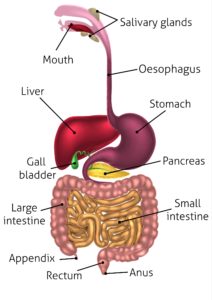 When bad microbes or foreign bacteria pass through the GI tract they interact with these probiotic bacteria. This interaction will stimulate the immune system to turn on and start fighting. The most common types of probiotic bacteria found in a healthy GI tract are Lactobacilli and bifidobacteria. During their growth cycle they produce organic acids like lactic and acetic acids, which lower the PH of the intestines creating non-favorable conditions for harmful bacteria. This is how eating foods with probiotic bacteria or supplementing with them can help to restore the normal bacterial ratio in your gut.

What are Good Sources of Probiotics?

The most common source of natural probiotic bacteria is in dairy food through yogurt, cheese and kefir. This is the best form of probiotic consumption because the dairy food itself helps to protect the bacteria from the high acidic levels in the stomach and small intestine. Look for “live or active cultures” to ensure the best quality of probiotic. In addition to the healthy bacteria in dairy food there are a number of other health benefits, which include calcium, vitamins and proteins. These nutrients are not ingested with a concentrated probiotic. Some other foods that have probiotic abilities include, Kombucha, sauerkraut, miso, kimchi, and tempeh. Most of the concentrated forms of probiotics, which are found in powders, capsules or tablets, can deliver a wide range of doses. Typically these doses must be very high in order to allow the highest amount of bacteria to pass through the stomach and small intestine. Due to the high acidity levels in these areas of the GI tract, many bacteria are killed off.

How to Choose a Probiotic?

There are a few things you want to look for when choosing a probiotic. A good probiotic should contain at least 30 billion colony-forming units or (CFUs). It should also have at least five or six different strains of bacteria, including lactobacillus and bifidobacterium, on its label. It should include a prebiotic, which the bacteria feed on to stay alive. This is usually listed as inuli on the label. It must display an expiration or use by date. Bacteria are living things and they will go bad if you don’t use them within their lifespan. Finally, some probiotics offer what’s called “acid protection technology” or come “encapsulated” which helps ensure that the contents make it past your stomach and small intestine. Research is suggesting that correcting the proper ratio of gut bacteria could be a major key in fighting diseases like Crohn’s, irritable bowel syndrome and antibiotic-associated diarrhea. Consider adding probiotic food sources and supplements to your diet to restore normal digestive function.