Winter is in full swing and with the cold weather comes holiday season AKA flu season. According to the CDC the flu spreads through droplets, which are expelled by a person who has the flu via coughing, sneezing or talking. Often times a person is exposed to the virus when they touch a surface that has these droplets and then touch their mouth, eyes or nose.

A few signs of the flu according to the CDC include: fever, cough, sore, throat, runny or stuffy nose, muscle or body aches, headaches, and fatigue.
As a specific correction chiropractor naturally I reinforce the idea of being proactive about one’s health as opposed to being reactive. Instead of waiting till you get the flu lets focus on some ways to protect you from the flu and at the same time protect you from other conditions as well. The primary way to protect from the flu is by strengthening the immune system naturally and increasing its ability to react to foreign pathogens (viruses and bacteria). There are five action steps you can take to increase your immune systems ability to fight off the flu.
Supplement with Vitamin D
As the seasons change from summer into fall and eventually into winter, we are exposed to less sunlight, the air is dryer, and the temperature is dropping. When the weather gets colder we tend to close up the windows turn on the heat, and stay in doors compared to the summer time when we spend most of out time outside. By spending more time inside a dry air environment we are exposed to less sunlight, which reduces our production of vitamin D. A research study suggests that people who are low in vitamin D are more susceptible to getting acute respiratory infections caused by pathogens like influenza.
Vitamin D and Acute Respiratory Infection
Exercise
The many benefits of exercise are virtually endless. If exercise isn’t part of your normal routine you might want to consider it. Research suggests that regular moderate exercise is associated with a reduced occurrence of infectious disease.
Immune Function in Sports and Exercise
However researchers did find that if the exercise activity was greater than 1.5 hours and at 50%-75% max oxygen uptake it may have a counter effect suppressing the immune system. Think marathon runners who train for hours performing longstanding cardio. If you need a suggestion for a place to start, I personally recommend Societe Indoor Cycling and Huron River Crossfit. If you’re looking for something specific to martial arts or want to work out while learning valuable self defense skills. I highly suggest The Japanese Martial Arts Center. This place is great and my son and I personally train judo there.
Cut the sugar
I know this one might be difficult around this time of year. However, eating a diet rich in grains, simple carbohydrates and sugar will place an un-necessary stress on the immune system and gut flora. Sugar is fertilizer for pathogens like bacteria, yeast and fungi. These pathogens can stress the immune defenses setting your body up for an influenza assault. If you don’t cut the sugar entirely then use good judgment in moderation.
Sleep
According to the CDC, 50 to 70 million Americans suffer from a sleep disorder, which means they’re not getting adequate sleep. Research shows that there is a connection between sleep and our immune system. They have found that with a lack of sleep our T cell count goes down. T cells are a type of white blood cell, that are the soldiers of our immune system. Just like a military fighting off a foreign invader, T cells respond to and fight off viruses and bacteria. This means that a lack of sleep will affect our ability to fight off the flu and cold.
Drink more water
In men 60% of their body weight is water and women its 55%. Aside from immune function, with over half of our bodies made up of purely h2o it would stand to reason that its pretty important. In addition to lubricating joints, regulating body temperature, and allowing cells to grow and reproduce, water plays a big roll in oxygenation and detoxification. This is crucial in moving toxins out of the body in order to allow nutrients in. Without water, toxins build up and this added toxic stress weakens the immune system. Water helps to produce lymph. Our lymph system carries white blood cells all over our body and helps to remove toxins. Finally water keeps your mucous membranes hydrated. Producing excess mucous is a normal response when your body is flushing out your respiratory tract. Without water you fail to produce sufficient mucus.
Adding Specific Structural Corrective Care 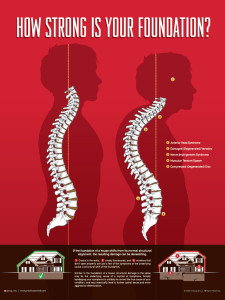 The brain and central nervous system control and regulate our entire body including the organs of the immune system. These include the thymus, tonsils, spleen and lymph nodes. Segmental displacements of the neck and spine can obstruct or block this neurological connection thus affecting the ability of the immune system to react to foreign pathogens. Here are a few studies that show the effect of specific correction chiropractic on the immune system.
Spanish flu killed nearly 675,000 Americans from 1917-1918 and between 20 and 40 million worldwide. In the state of Iowa, medical doctors treated 93,590 patients for Spanish flu of these cases 6,116 patients died a loss of one patient for every 15 cases. In the same state 4,735 patients were treated by chiropractors with only 6 deaths. That is a loss of one patient for every 789 cases.
A study was performed on HIV patients to determine the affect of chiropractic on CD4 blood cell count. CD4 count is like a snap shot into how well your immune system is functioning and these are the cells that the HIV virus attacks. What researchers found was quite shocking. Of the patients participating in the 6 month study the control group or (non adjusted group) received a 7.96% DECREASE in CD4 count while the adjusted group received a 48% INCREASE in CD4 count.
Selano JL, Hightower BC, Pfleger B et al: “The effects of specific upper cervical adjustments on the CD4 counts of HIV positive patients. Chiropractic Research Journal 1994;3(1):32.
← Personal Training with Specific Correction Chiropractic
Disconnected Digestion What Causes It →